We hope this article helps you. Aquafix is always looking for new partners in all areas, within the United States and outside of it, and we would welcome hearing from you. For additional technical discussion call us at 888-757-9577 or email technicalservice@teamaquafix.com. You will find our service helpful and friendly.

Long chain fatty acids (LCFA) often present problems in aerobic systems because of the difficulties with effectively degrading them. Usually, the only organism that can truly undertake fatty acid degradation is a specialist filament like Type 0092, Microthrix parvicella, or Nocardioforms. However, these filaments then use the LCFA to produce lipids to strengthen their cell walls, which helps the filaments reproduce and create foam, bulking, and other issues. These issues are commonly what indicates there is an excess of LCFA in the system.

The main difficulty in degrading long chain fatty acids in aerobic conditions the need for several extra steps compared to other foods. In the case of short chain fatty acids (which have a similar degradation pathway to LCFA), the shorter structure allows it to move directly through the inner mitochondrial membrane which is required in order for the mitochondria to perform the final step: β-Oxidation, the catabolic process mitochondria use to degrade fatty acids. Long chain fatty acids require the assistance of an extra amino acid called carnitine to transport the LCFA through the inner mitochondrial membrane (a process called the carnitine shuttle mechanism). In total, this process uses several additional biocatalysts and adds two steps to the process of degradation. 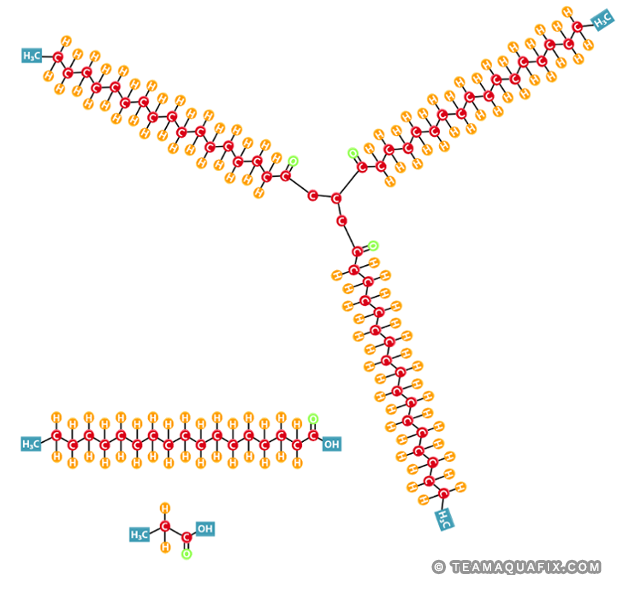 The Difference in Anaerobic Systems

In anaerobic systems the process is much easier and long chain fatty acids are generally degraded fairly easily. Since oxygen is not present in anaerobic systems, an alternative system to β-oxidation has to take place, called hydrolysis. This is performed by a variety of bacteria that are outcompeted in aerobic environments but are found in much larger populations anaerobically. These bacteria break down LCFA into shorter chains which are then used by acid generating bacteria in order to produce energy, and acetate. The acetate, in turn, is used by methanogenic bacteria to produce energy, and methane.

Acid generation tends to be a more stable process than methane generation as only 3 genera of bacteria can perform methane generation in a mesophilic digester—only 2 in a thermophilic system(see our Anaerobic Digester Upset and Troubleshooting page for more on thermophilic digesters) —and over 10 species are capable of acid generation. Acid generating bacteria can also survive more diverse temperature conditions as they are typically facultative anaerobic bacteria (meaning they can perform anaerobic respiration if oxygen is absent, but prefer to have oxygen). These bacteria typically grow in an aerobic process with significantly lower temperatures than are seen in an anaerobic process.

Generally if a plant has problems with long chain fatty acids, the best method would be to remove them in pretreatment with a DAF system or something similar, treat them anaerobically when possible, or use the products we’ve formulated for breaking down LCFA. To ensure complete degradation of long chain fatty acids aerobically, and to avoid having them consumed by filaments, we suggest operators use Qwik-Zyme L and Foam Buster. These products will help convert long chain fatty acids into more easily degraded short chain acids. Specifically, Qwik-Zyme L creates hydrolysis to take place in the aerobic environment, and Foam Buster takes this further by creating a favorable environment for the hydrolyzing bacteria by providing nutrients to enhance this process.

To allow fatty acid degradation in an aerobic system, Qwik-Zyme L incorporates multiple biocatalysts that specifically target the bonds that keep fatty acids together (shown above in black). As these bonds are dissolved, the grease molecule breaks down into a strong of long chain fatty acids, which are then broken down further into short chain fatty acids. Once Qwik-Zyme L has degraded the acids to this level, the mitochondria can perform the necessary steps to finish degradation, and your wastewater bacteria will consume the leftover matter. 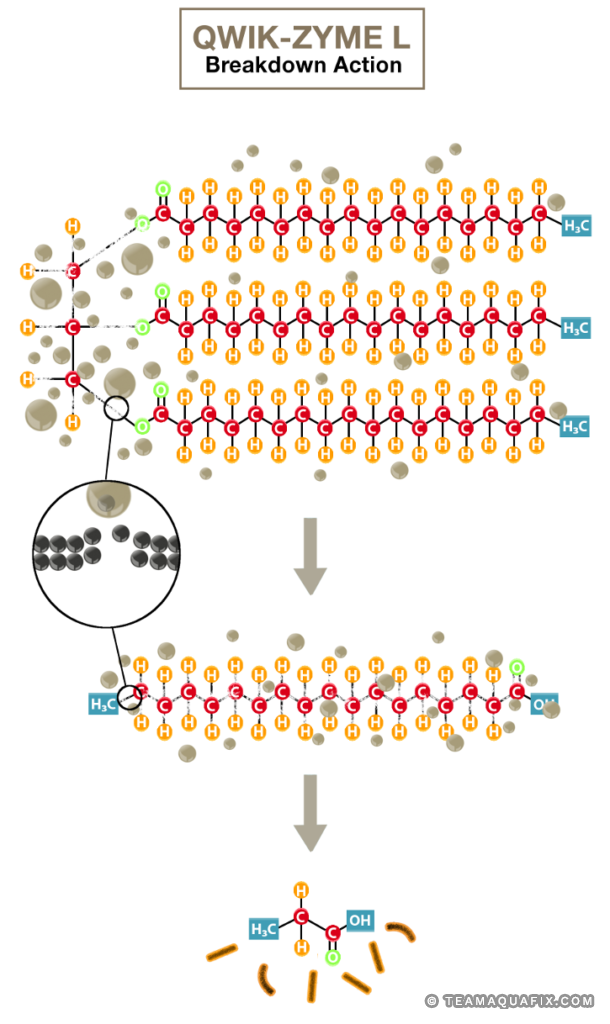