Sludge Reducer naturally decreases sludge blanket thickness at 1/10th the cost of dredging. With VitaStim Sludge Reducer, you can easily remove 30-60% of sludge from your lagoon. As the bacteria go to work consuming organics you’ll also notice improvements in effluent BOD, TSS, and decreased odor.

*For temperatures other than 65-78° F, use one of the other Lagoon Line products. Below, explore them and Lagoon Line Companion Products.

Mechanically dredging wastewater lagoons and ponds is an expensive process that stir up nutrients that were trapped in the anaerobic layer of sludge and puts them into the water column to fuel algae growth. Aquafix is dedicated to providing the best biological and biochemicial technology to remove wastewater sludge. This in turn saves wastewater departments and cities thousands of dollars.

VitaStim Sludge Reducer is part of a proactive approach to lagoon treatment that promotes healthy biological activity in both the indigenous and added bacteria. These gram-negative cultures set to work in every area of lagoon health to balance the biological BOD-degrading processes of your lagoon. This reduces compacted sludge, clarifies the water, and reduces odors. VitaStim Sludge Reducer is used in the transition times between extreme seasons, containing bacteria that are highly-active in temperatures between 65-78° F.

For water temperatures above 78° F: VitaStim Summer Slam is formulated with a blend of lagoon heat-loving bacteria that are extremely active during the summer.

For water temperatures 40-64° F: VitaStim Polar contains cold-loving lagoon bacteria that thrive is in temperatures that cause other bacteria to shut down.

OxyPaks XL is a granular oxygen source and sludge digestion accelerator that really kicks the bacteria into overdrive to chew up sludge. It frees up sludge from the anaerobic layer to allow bacteria to easily access and digest the sludge BOD.

For extreme sludge removal, use Sludge Rx. This revolutionary tablet will turn 1 foot of nutrient-filled sludge into a few inches of bacterial biomass while dramatically reducing nutrients.

A three lagoon system  in central Illinois receiving 25,000 gpd was getting bad odors every spring during “turnover.”  Turnover is when the water warms in the spring, lifting the compact sludge up.  Their large lagoons were about 6ft deep with around 2ft of sludge.  They have no aeration but enough wind action to give it white caps.  They need to minimize the sludge buildup, but like every city they were on a budget.  Hank, the public works director, began with skepticism, but that quickly turned around as his lagoons did.

They began adding 1 lbs a day of VitaStim Sludge Reducer per cell. (VitaStim Polar in the winter)

After a couple of months the odors started to subside, and within the first year they reduced 40% of sludge buildup, and equivalent to 3000 truck loads.  They continued the treatment with another 1000 truck load reduction the following year.  They continue to produce a superb effluent and have done a phenomenal job turning the system around. 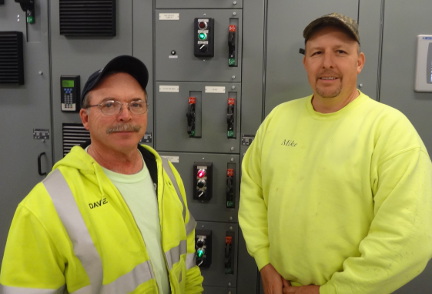 Dave and Mike operate a pond system with one 4 acre and two 1 acre lagoons in a town noted for its famed Italian restaurants.  A manufacturer in town that produces frozen dinners and the manufacturer’s discharge is about 110°F. These high temperatures create low D.O. conditions that cause odors in the lagoon. Under further investigation, we found the industry was sending loads of cheese to Dave and Mike.

VitaStim Sludge Reducer was added daily into the lagoons and Qwik-Zyme P was metered into right at the factory’s effluent to pretreat before the lagoon system.

Qwik-Zyme P heavily broke down the proteins in the cheese making it significantly easier for the VitaStim Sludge Reducer and natural bacteria to reduce the   sludge buildup.

Greg and his team have a 3 cell system of one 6 acre and two 2 acre lagoons that were becoming inundated with sludge. The ponds were about 30 years old, not aerated, and have never been dredged or treated to remove sludge.

The combination of new cultures and existing bacterial cultures produced a rapid and progressive decline in their sludge levels. During the progress Greg kept saying, “The ponds keep taking on more water, but we never had to discharge.” VitaStim Sludge Reducer worked to degrade the sludge and create more capacity. Progress of sludge removal was measured by performing sludge depth measurements prior to treatment and then again one year later