Sphaerotilus natans (S. natans) is a large gram negative filament that causes lots of bulking in wastewater if proper conditions exist.  It is usually easy to identify because of its false branching, and large sausage-shaped cells.  False branching is when two of the same filament get fused together by a sheath and continue to grow in opposite directions.  Even though the filament is Gram negative, its sheath can excrete EPS slime which can cause it to appear to have a gram positive sheath. (Learn more about EPS and settling) 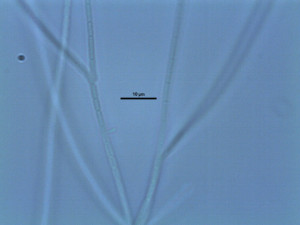 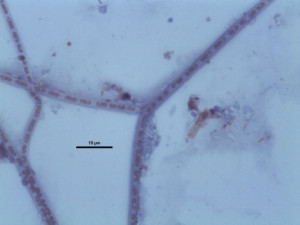 This filament can be a real threat to wastewater operators as it is difficult to subdue.  Wasting of sludge is ineffective at controlling S. natans because the filaments are capable of anchoring themselves in a digester or aeration basin to avoid being washed out.  This also causes S. natans to do well in conditions with high flow rates. S. natans tends to thrive in conditions of low dissolved oxygen, and low nutrients.

S. natans has a durable sheath which can continue to cause bulking even after it is dead.  Luckily it is easy to prevent with good aeration, and balanced nutrients (BOD:N:P ratio of 100:10:1)