DAZZeL Eco Plus is a super concentrated wastewater odor control formulated to obliterate the most repulsive odors over municipal wastewater plants and lagoons, and all food and ethanol processing facilities.

This product is a 20:1 ultra concentrated essential oil complex derived from plant leaves and herbs. It binds with odor-causing molecules and leaves a clean fragrance in the air that extends as far as one-half mile.

The chemistry in DAZZeL Eco Plus absorbs with malodorous molecules and breaks them down to nothing. This does not mask odors, it neutralizes them and provides a long-lasting solution. This product is similar to ECOSorb™.

DAZZeL Eco Plus is undiluted, but should you choose to dilute it to a 1:1 ratio, it's very easily blended in water.  One gallon makes 20 gallons of ready-to-use odor control product. DAZZeL Eco Plus is made to be diluted on site and available to be shipped all over the world. 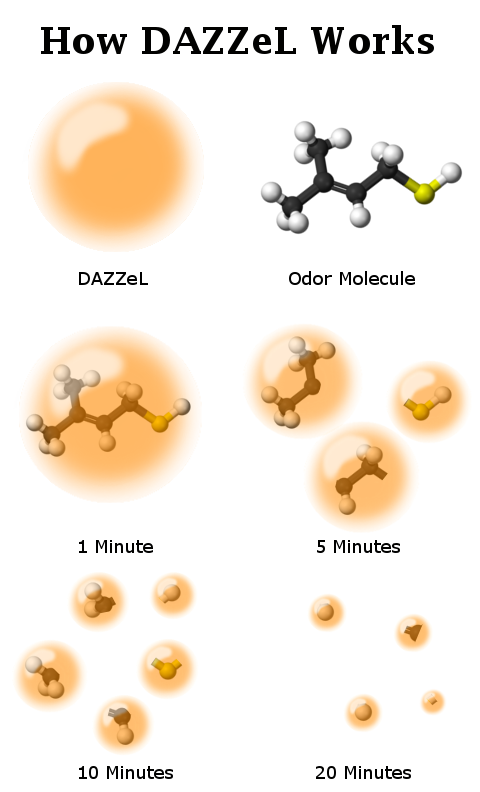 This rendering shows what happens when atomized DAZZeL micron droplets absorb and degrade mercaptan and other odor molecules.

Many companies are selling a perfume for sewers. These fragrances may mask smells and work for short periods of time, but do not provide long-lasting wastewater odor control. DAZZeL Eco Plus is a no-chemical, all natural ingredient that provides a continuous odor-neutralizing result.  What makes these natural oils unique is their ability to vitalize slowly (a little goes a long way).  As it vitalizes, the odor molecules are broken down.

DAZZeL Eco Plus binds and absorbs with the odor-causing compounds to nullify it.  This is similar to when lemon is used on fish, the fresh lemon isn’t masking the smell, it’s the citric acids reacting with the fatty acids.  DAZZeL Eco Plus uses similar chemistry, but at a large scale.

A cheese plant in IL had to think quickly as their WWTP went out of commission due to a malfunction and all waste went straight into their 4 acre pond system. The plant runs at 100,000gpd, discharging about 4000-6000 ppm of COD. This caused immense odors and COD violations. Their first goal was to eliminate the heavy odors affecting surrounding houses and highway.

The plant began a comparison test between a floating citrus (delimonene) product and Aquafix’s DAZZeL Eco Plus. They tested 10 gallons of each product at separate times. 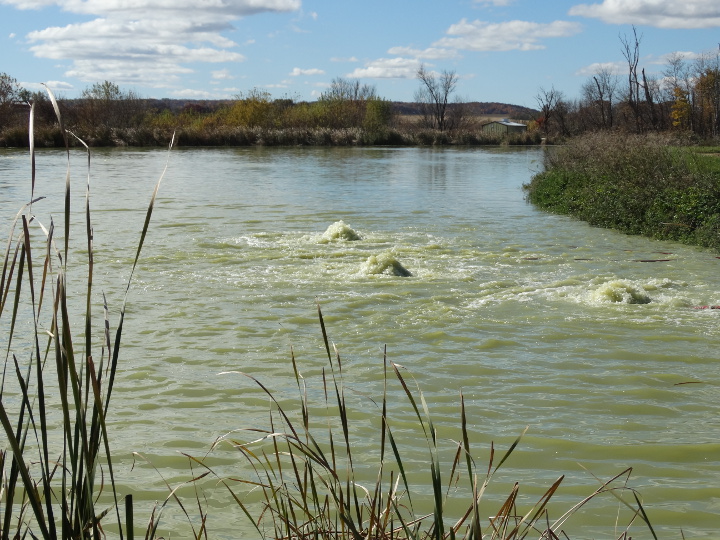 The citrus product gave a strong scent at first, but lasted only a few days. DAZZeL Eco Plus, at first, gave off small scent, 3 days later the bad odors diminished while the soft aroma lingered. DAZZeL Eco Plus really took off and lasted for a long time.  They continued treatment with Qwik-Zyme P and VitaStim Polar to bring down COD (major cause of odors).

Dave has a four acre lagoon with a high BOD contributor. This high incoming BOD sucks most of the oxygen our of the water causing the lagoon to give off a horrendous smell. With many complaints from the town and its citizens, Dave had to do something quick.

Dave started using DAZZeL Eco Plus at 5 gallons per acre.

The odors diminished and the town was left with a pleasant and soft aroma for 3-4 days. Dave continues to use DAZZeL Eco Plus for premium wastewater odor control. 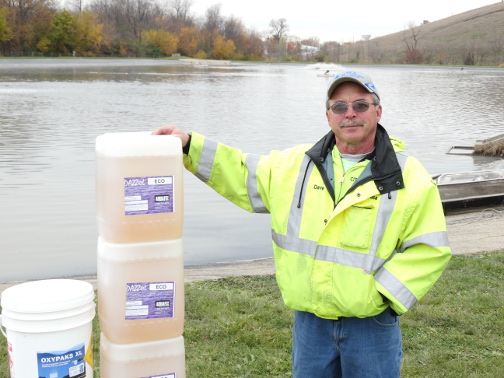 “I love this DAZZeL Eco. It saves my day when the pond starts stinking. I swear by it.” – Dave from an Illinois municipality.