Wisconsin Institute for Sustainable Technology at UW Stevens Point conducted a study of FOG (fat, oil, and grease) control by GreaseZilla versus a major competitor.

Products were tested on butter, coconut oil, lard, a combination of those three, and an active lift station grease sample. The lift station chosen is a municipal station that primarily receives fast food restaurant waste. 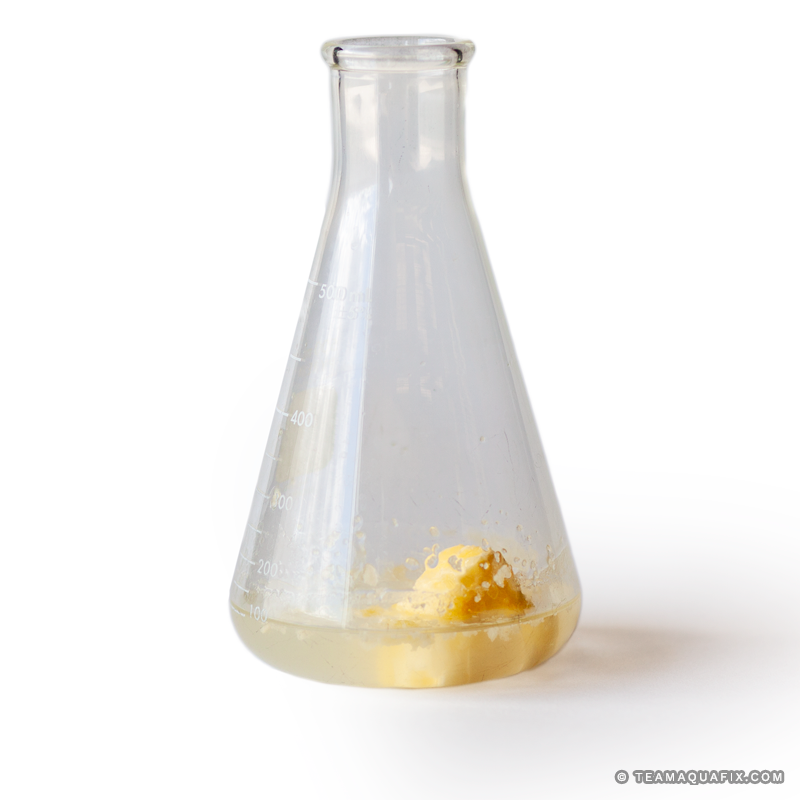 The presence of fats, oils, and greases (FOG) is a major concern for the municipal and industrial wastewater industry. Presence of FOGs in wastewater treatment systems can lead to buildups which can cause blockages and ineffective wastewater treatment. This is especially true in lift stations, where buildups of FOGs can impede sewage flow. The point of entry can be from numerous sources such as; industry, restaurants and homeowners. Regardless of the source, once it enters the sewage pipes it can become problematic.

The objective of this study was to determine the effectiveness of GreaseZilla biocatalyst, a wastewater additive developed and produced by Aquafix Inc. According to product labeling the addition of this GreaseZilla biocatalyst to areas prone to buildups of fat deposits will aid in ‘breaking-up’ these deposits so they can flow through the treatment system.

This study was completed at the Wisconsin Institute for Sustainable Technology (WIST) located within the University of Wisconsin – Stevens Point. Five different fat samples were tested including butter, coconut oil, lard, a field sample, and a composite of butter, lard and coconut oil. The Aquafix GreaseZilla biocatalyst was also compared against a competitor’s product.

All experiments were carried out in a temperature controlled shaker table at 25°C. Shaker speed was set at 130RPM. Testing was performed on 5 different fat samples: Butter, lard, coconut oil, a field sample, and a composite of butter, lard, and coconut oil.

Experiments were done in 250 mL beakers. To each beaker 3 mL of fat was added. Prior to adding the fat, it was first melted on a hot plate. Beakers containing the fat were then placed in an incubator set at 70°C for 4 days to remove any residual water. After the 4 days the beakers were weighed to find the initial mass of the fat.

At Aquafix, we pride ourselves in being environmentally friendly with all our products. This is why Aquafix chose Bacillus thuringiensis subsp. israelensis to be in our EPA-registered product, AQUABACxt. The beakers were allowed to sit at room temperature until the fat fully solidified. Then 3 mL of either the GreaseZIlla or the competitor’s product was added to each beaker. The beakers were placed in a temperature controlled shaker table for 1, 5, 10, 20, 30 and 60-minute periods. Once the beakers were removed, they were washed once with 20 mL of distilled water, swirling vigorously for 30 seconds. The beakers were washed three additional times with 10 mL of distilled water.

The beakers were placed in the incubator at 70°C for an additional 4 days to remove all the water. Once dry and cooled samples were weighed, and the mass loss was calculated.

All experiments were completed in triplicate.

The following section contains the results for the experiments completed using the two products. A blank run, using distilled water in lieu of the products was also done.

Below in Figure 1 is shown the removal of butter over a period of 60 minutes comparing a blank, GreaseZilla and a competitor’s product. A maximum removal of 85.2% of the butter was observed at 60 minutes with butter treated with GreaseZilla.

Shown in Figure 6 is the percent removal of a fat at 60 minutes. With all three sources of fat the GreaseZilla treated samples had the greatest reduction. Treating with only distilled water showed little to no reduction in mass. This would support the claim that the biocatalyst treatment is aiding in the breaking up of the fat deposits.