How Can I Remove Ammonia From My Wastewater Plant?

Nitrification in wastewater plants depends on slow-growing nitrifiers and is hindered by the fast-growing competing bacteria. We want to give operators two powerful tools to help in ammonia removal and improve or restore nitrification in their plants: knowledge and VitaStim Dynamic Duo.

We hope this article helps you. Aquafix is always looking for new partners in all areas, within the United States and outside of it, and we would welcome hearing from you. For additional technical discussion call us at 888-757-9577 or email technicalservice@teamaquafix.com. You will find our service helpful and friendly. 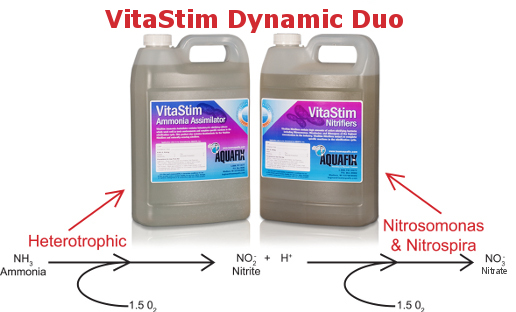 Operators of wastewater treatment plants that suffer from high ammonia levels come to us for ammonia removal solutions. We use microorganisms to oxidize ammonia to nitrate. Our VitaStim Dynamic Duo is specifically adapted to work with your entire system, taking into account the chemistry you use, any physical limitations of the plant, and the present microorganism population. 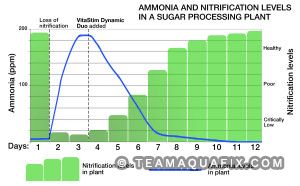 VitaStim Dynamic Duo is a two-part high concentrate nitrifying bacterium designed to rapidly grow.  Through extensive on-site research Aquafix has developed specific strains to work together to increase ammonia removal and restore nitrification in your aerated wastewater treatment process. Depending on the environment, nitrification can be restored in as little as 1-4 days. 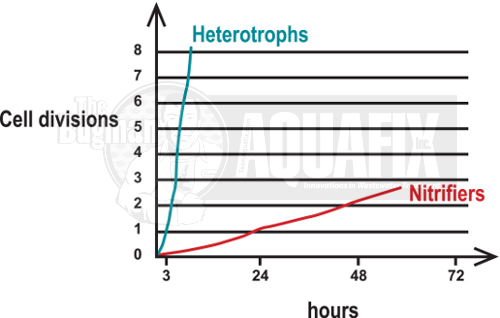 Ammonia is found in many places in the environment, including fertilizers, human waste, and industrial waste (dairy, meat, corn ethanol). Nitrosomonas (AOB), Nitrobacter, and Nitrospira (NOB’s) are chemoautotrophic bacteria that contribute to ammonia and nitrite removal. Ammonia that enters a wastewater plant is oxidized from ammonia to nitrite by Nitrosomonas and Nitrospira. Nitrobacter then oxidize the nitrite to nitrate.

Common doubling times for nitrifiers are 24-48 hours at temperatures of 70°F while most heterotrophic bacteria in the same environment have a typical doubling time of 20-30 minutes.

Why is Nitrifier Growth So Slow? 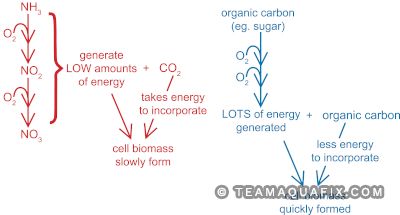 Although Nitrosomonas, Nitrobacter, and Nitrospira are commonly found in the soil and can easily wash into wastewater plants (WWTPs), many plants lose these bacteria because of environmental conditions, contamination with toxic compounds, low dissolved oxygen, or competition with other microorganisms.

Oh No! I just Lost Nitrification and Ammonia Removal!

We Have a Plan!

Our seven steps to nitrification show the operator each step and how and why it is vital to the survival of the nitrifying cultures. These organisms are very sensitive to toxicity, and are strict aerobes and prefer a kind and gentle wastewater operator. Our seven steps guide operators back to nitrification, and more importantly impart an understanding of what to work on.

Inside the basin, the nitrifier populations are low, about 10% of the total bacterial population.  Nitrifiers are slow growers, so if you waste heavily for a few days in a row or when temperatures are low, the entire population may be lost. 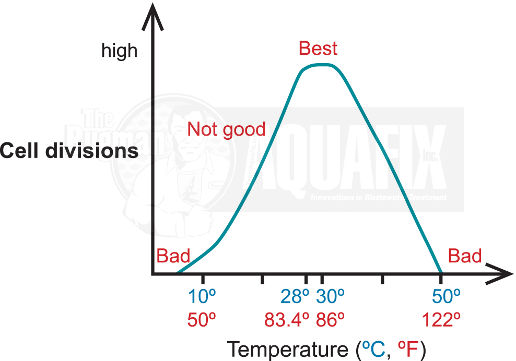 At temperatures less than 20°C (68°F), cellular metabolism slows down and fewer cells are nitrifying and dividing. Above 40°C (104°F), the proteins will be inactive and the cell membranes may break apart resulting in cell death.

Heterotrophs have greater numbers than nitrifiers in wastewater and are more efficient at scavenging oxygen. In mixed populations with low D.O., the heterotrophs will be able to quickly use the available oxygen faster than the nitrifers since oxygen is also consumed in heterotrophic metabolism. It is a good idea to increase the D.O. levels with high incoming BOD or NH3.  Remember: D.O. levels increase with colder temperatures and decrease in warmer temperatures. 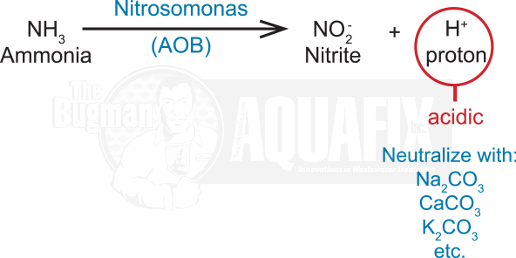 High rates of ammonia oxidation will acidify the environment and must be neutralized with additions of carbonate alkalinity (e.g., Na2CO3, CaCO3, or K2CO3) since 4 – 7 ppm alkalinity are used for every 1 ppm of ammonia. The biocatalyst in Nitrosomonas that carries out the first part of ammonia oxidation is inhibited (rendered inactive) by pH less than 7. 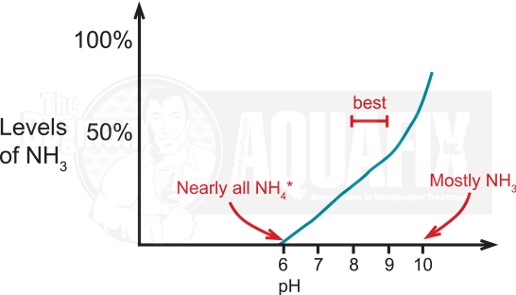 AOB only utilize ammonia not the ammonium ion. The levels of ammonia to ammonium vary depending on temperature and, more importantly, on pH. At lower pH values, most of the ammonia is in the ammonium form leaving you with a lot of nitrogen that the AOB cannot get rid of and conditions that would inactivate the ammonia-oxidizing biocatalyst. The ideal pH for ammonia oxidation is between pH 7-8.

Nitrifiers typically form aggregates of AOB and NOB along the edges of flocs made up of heterotrophic bacteria where the D.O. concentrations are high and they can still retain the protection of the biofilm. NH3 contains more energy per mol than NO2– so AOB may synthesize a capsule to encompass both cell types. 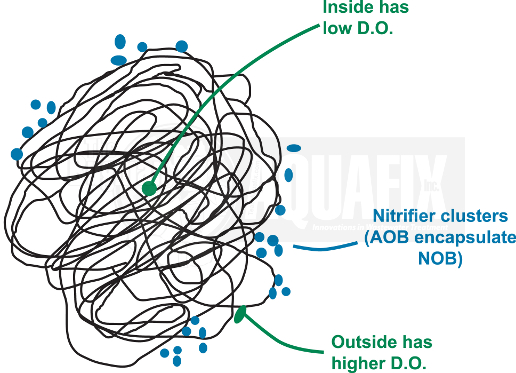 7.  Toxicity
Heavy metals such as nickel, copper, zinc, cadmium and chromium can be toxic to nitrifiers. Exact levels of each are difficult to determine. Over chlorination can also cause toxicity. Also too high of ammonia (thousands of ppm) or a buildup of the intermediate nitrite can also cause toxicity. In short, nitrifiers are sensitive to toxicity, they are fickle and when temperatures get cold they are more subject to toxic effects of plant design, capacities, efficiency, and plant operation.

Notice the distinct membranes in this picture of Nitrosomonas Europaea, taken using a scanning electron microscope. Ammonia oxidation occurs in these membranes which are vulnerable to toxic shock.