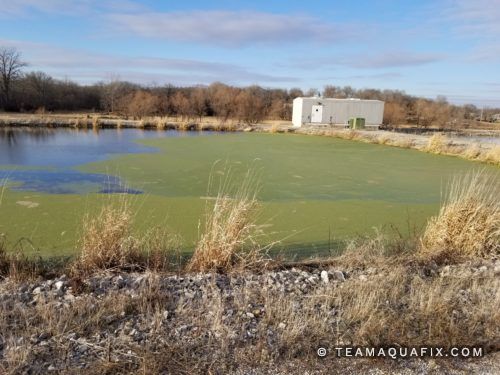 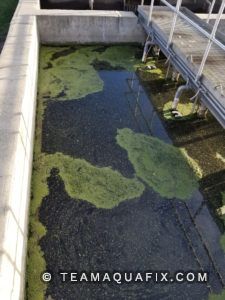 LEFT: Duck weed in holding pond prior to recirculation
RIGHT: Duckweed in secondary clarifiers after being recirculated from holding pond

Duckweed is an invasive plant that floats on or just beneath the surface of still water and can be very difficult to get rid of. Here it is holding strong in Central Iowa in the middle of December. While some operators might like it for the way it reduces light penetration and algae, in some cases it can cause real problems. For example, when the pond recirculates to the head of the plant and you end up with duckweed in the secondary clarifier.When you’re ready to start treating duckweed, Aquafix is here with a solution.
The best treatment for unwanted duckweed is the combination of an aquatic herbicide and biocatalyst for optimal penetration of the herbicide and degradation of the dead duckweed so that it doesn’t sink to the bottom of the lagoon and add to the internal nutrient load. Duckweed Complete offers a power pack of these two components. FLUMIGARD® is a USEPA registered aquatic herbicide and PondZilla is a biochemical catalyst which aids in penetration of duckweed’s waxy cuticle and speeds degradation of dead plant material, so it does not contribute to excess sludge on the bottom.

FLUMIGARD® aquatic herbicide treats and controls tough invasive plants, quickly. It dissolves and mixes into water quickly, and dissipates without accumulating in sediment. FLUMIGARD® is a contact herbicide, and effective use can eliminate duckweed, hydrilla, watermeal, and more.

When used in tandem with an algaecide or herbicide like FLUMIGARD®, PondZilla Pro’s natural biocatalyst increases chemical efficiency by aiding penetration into the plant. Crucially, once the algaecide or herbicide kills the plant, PondZilla Pro works to degrade it. This works at the cellular level to accelerate decomposition of dead organic matter and clarify the water column. This complete degradation of the duckweed prevents nutrients from the dead plant to be released into the water.